About projectiondesignprojectiondesign is a Norwegian company that designs, manufactures and markets high-performance projectors for professional, business and consumer applications. Amongst its core markets are high-resolution scientific... 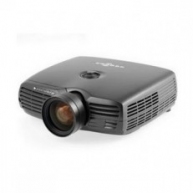 The projectiondesign F22 series of DLP projectors is our entry level
professional model. It shares multiple features and performance
benefits with our larger and more costly models, such as unique colour
matching and calibration possibilities, multiple lens options, and our
unmatched 24/7 operation warranty.
overview
Markets and applications
The F22 series is perfectly suited for installations with relatively small screen sizes,
or for installations where multiple images are viewed simultaneously. Either as parts
of a single display, or separated into tiles, including public displays such as museums
and entertainment centres, small domes or points of display, and small visualization
screens and simulators. Thanks to

About projectiondesign projectiondesign is a Norwegian company that designs, manufactures and markets high-performance projectors for professional, business and consumer applications. Amongst its core markets are high-resolution scientific visualization, visual training and simulation, medical imaging, broadcast and post production, public media and entertainment etc. Since 2013, projectiondesign is part of Barco, a global technology company that designs and develops visualization products for a variety of selected professional markets. Barco (NYSE Euronext Brussels: BAR) is active in more than 90 countries with about 3,900 employees worldwide. Barco posted sales of 1.156 billion euro in 2012. projectiondesign is located in Fredrikstad, Norway.