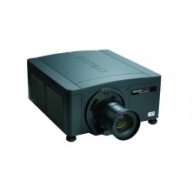 The series offers a full suite of specifically-designed lenses for any configuration or application. With the optional Christie Twist module for internal image warping and edge-blending, you can project on virtually any screen or surface. The Christie Mirage WU7 more pixels, more projectors, more reality.
Proven 10-bit Native HD Processing
Utilizing the proven 10-bit processing that has been used in our 2K resolution products, the Christie Mirage WUXGA Series of projectors continues to exceed the customer expectations in image quality and reproduction. High bandwidth supports the additional functionality of Picture in Picture with simultaneous multi source stereo and or mono viewing in either foreground or background or both windows.

Mirage WU7 - Used as a demo unit. In like new condition.