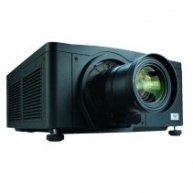 The Christie Mirage HD6K-M delivers visually stunning 3D for home theatre and entertainment, museums and education, scientific research, manufacturing, oil and gas exploration and anything in between. Offering complete compatibility with todays 3D home entertainment requirements, the Christie Mirage HD6K-M is ready for Blu-ray 3D video, PS3 and other gaming consoles and meets the mandatory 3D spec for HDMI v1.4a.

With dual image processing capabilities, there are three modes of 3D input - native 3D input, frame doubled 3D and Dual Input 3D for maximum source compatibility and high-performance flicker-free operation without the need of a passive to active converter.