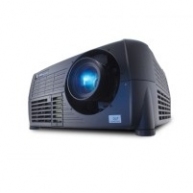 Offering the highest resolution and the highest contrast ratio, the Christie Matrix HD2 simulation projector is based on DLP technology and offers 2300 ANSI lumens. Our SuperCR technology provides contrast ratios up to 2000:1 allowing for low black levels for incredibly accurate night scene images.

The Matrix HD2 utilizes a Color Purity Filter (CPF) to enable superior color saturation, color matching and superior black levels for unsurpassed day and night scene blending. Combined with the highest color uniformity and features such as ChristieTWIST image warping and edge-blending, RGB color matching, full control of gamma curves and grayscale tracking, high input bandwidth and less than one frame of propagation delay, the Matrix HD2 is a great projector suited to many applications and is also an ideal CRT replacement solution.

With the Christie Matrix Series, you can recreate reality.