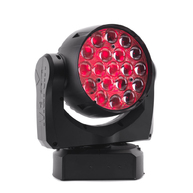 The MAC Aura XB takes an award-winning, innovative, compact LED wash light to the next level, incorporating many new features first introduced with the MAC Quantum Wash. Not only does the MAC Aura XB offer additional brightness, it also features a new superior color mixing system and an optimized lens design for tighter beams and more even washes. Martin's unique and patented Eye-candy Aura Effect is also part of the package.