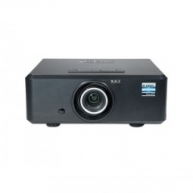 The imagery benefits associated with the M-Vision Cine series are plentiful, including an expanded color gamut range, up to 5500 lumens and up to 2000:1 contrast ratio. For any home Venue, including those contending with high ambient light, the Cine 400 series offers bright, saturated color. Augmenting these benefits is the overall efficiency of the single lamp system, meaning the 400 produces the beautiful imagery while consuming a fraction of the wattage of similar products.

Installation is incredibly flexible due to the M-Visions compact and lightweight chassis design, plus extraordinary lens shift range of .3 of frame horizontal and .7 of frame vertical. Multiple lens options provide further flexibility, with a throw range from .73 to 4.0:1. It should also be noted that the (.73) fixed lens has NO LENS SHIFT since it is meant as an on-axis or center of the screen lens best suited for rear screen projection applications only. Connectivity includes two HDMI inputs, as well as RGB via D-15, component, composite and S-Video inputs.

Providing a bright, saturated image from a small-form single-chip display, the M-Vision Cine 400 presents a powerful yet remarkably affordable Solution for a variety of commercial and home entertainment applications, including:
Media rooms, family rooms and home theaters

As is the case with all Digital Projection displays, our careful engineering guarantees the M-Vision Cine 400 provides remarkable contrast and color saturation for years to come.