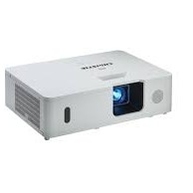 The Christie​ LW502 is a feature-rich, 5,000-lumen-class​ 3LCD projector showcasing Christies renowned level of performance in a compact, easy-to-use and value-added package. Offering a long lamp life (up to 6,000 hours) and integrated audio, this projector provides a low total cost of ownership and is designed for easy classroom or meeting space installation.