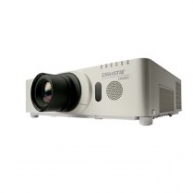 The Christie LW401 is flexible and affordable. It has the power needed for professional-level presentations. The optional lens suite includes a selection of zoom lenses with repeatable position recall that makes the Christie LW401 ideal for small- to medium-sized applications and wide screens. With the projectors USB port, presenters can use wireless devices to present their data. The Christie LW401 also has a text message function thats ideal for displaying emergency or evacuation messages as an overlay on the screen.

This 3LCD projector is low maintenance, with features such as long-lasting lamps and (<0.35W) standby operation, all resulting in a low total cost of ownership.