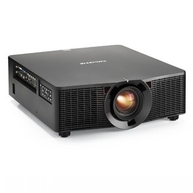 The Christie H Series packs a lot of high-performance features into a surprisingly small and sleek package. Plus, the Christie H Series looks great: with an input panel cover plate and a second HDMI input on the bottom of the projector to hide cords. And, choose between black and white models to suit your design. Dont sacrifice one for the other: experience color integrity and bright, powerful images with Christie H Series projectors.

Read on to see what else weve packed into this beautiful and versatile powerhouse projector: